The biggest operational challenge for companies today: finding qualified help at rates to keep their businesses open. The U.S. started 2022 with a 3.8% unemployment rate and 11 million job openings, the widest gap in jobs-to-available-employees in decades.

“Our mission is to build #humanoidrobots that will change the world and solve the labour shortage,” says @EngNadeau, CTO of Halodi Robotics.

The obvious answer to this deficit for commercial security, retail operations, warehouse logistics, and healthcare staffing is to augment the workforce with robots to extend available human resources.

But robots don’t have to replace humans; they can be collaborative teammates. Survey respondents in a 2020 World Economic Forum (WEF) report “expect robots will take on more repetitive or menial tasks and leave humans free to focus on more substantive tasks.” Scarce personnel can prioritize complex tasks and creative functions that are ultimately more rewarding.

"The #robot is a tool that can streamline the workday and free up time to spend on patients. We can have more time to talk to patients."https://t.co/grLeAblA2P

The future of helper robots and human-robot collaboration is super exciting 🚀https://t.co/1TJHYqPxlY

The pandemic has proven to be the biggest single driver for change in the industry, according to the International Federation of Robotics (IFR). There’s no question that service robots can make workplaces more efficient by performing dirty, dangerous, and dull tasks that don’t require human intervention. In addition to warehouses and assembly lines, robots are no longer an unusual sight in guarding office buildings, cleaning hotels, and delivering food. Siri, Alexa, Roombas, AGVs, AMRs, and other helper bots have already established a beachhead in everyday life. Perhaps that’s why Association for Advancing Automation (A3) data for 2021 shows an all-time high for North American robot orders.

Today we welcomed @EuropeanSpaceA1. We discussed how humanoid robots can be used when testing space equipment (space suits, crew capsules).

Having humanoids be a part of testing can reduce the likelihood of human harm in early launches. 🚀 pic.twitter.com/GIpW9RMvQF

But for anthropomorphic service robots to become widely accepted, they must move and interact with humans in a way that feels relatively natural. They must be affordable, and the system must be straightforward so nonexperts can successfully interact with them. They need to do valuable physical labour, so they have to be very capable. They also need to exert a large force — whether lifting things, moving things, opening heavy doors, helping someone into a wheelchair, or pushing a trolley.

The challenge is to make them do this safely.

yeah HuggingFace transformers are nice but can they give literal hugs?🤗
didn't think so pic.twitter.com/l7liZW3MHI

Service and helper robots must be capable of learning multiple tasks to assist human beings. Their physical Human-Robot Interaction (HRI) extends far beyond fixed repetitive industrial tasks undertaken by stationary robots. As such, they need to be able to interact with the human world as humans do.

We must bring service robots out of the factory and integrate them into the human world. Humans are sometimes an afterthought when designing new “smart” facilities. But to progress and accept them, we must make them fit into our world, not the other way around. We can’t redesign our homes, office spaces, and common areas for the robot to get from point A to B.

Our D.C. office building got a security robot. It drowned itself.

We were promised flying cars, instead we got suicidal robots. pic.twitter.com/rGLTAWZMjn

Robots must be designed from the ground up to be able to deal with any object they encounter, just as a human would. A humanoid form is an optimal design for a robot, and shaping a robot like a human allows it to interact in the human environment as a human does. An R2D2-type robot can’t manipulate doorknobs or reach a high shelf.

However, a humanoid robot creates expectations, sometimes subconsciously, of human-like behaviour. That means they must not only be affordable and capable, but they must be intrinsically safe around humans and comfortable, quiet, and fast.

Moreover, the closer to real life a robot becomes, the more it starts to bother people that it isn’t quite human enough. A 1970 essay described the “uncanny valley”, where a person’s response shifts from empathy to disgust as a humanoid robot fails to attain the expected degree of lifelike appearance and behaviour (see also A.I., the 2001 Steven Spielberg film).

We have reached the stage where it is nearly impossible for humans to detect real faces from fake. A study in the Proceedings of the National Academy of Sciences concluded that “synthesis engines have passed through the uncanny valley and are capable of creating faces that are indistinguishable” from real ones.

Vast amounts of time, money, and personnel are currently devoted to making humanoid robots look more human when the emphasis needs to be on their behaviour around humans. We need to be talking more about accountability and liability for robot safety.

It doesn’t mean that lifelike facial expressions don’t offer value for creating more substantial acceptance in socially assistive use cases where the robot helps with intimate personal tasks. Suppose humans are no longer able to detect real faces from fakes. In that case, companies developing anthropomorphic robots have an even greater duty to ensure they “do not harm” regarding robot movement and behaviour.

Until recently, most robots have been far too powerful — and therefore dangerous — to assist humans outside of an assembly line.

Because they were designed based on accuracy and exact positioning, they haven’t been well-suited for an unstructured environment populated with humans who create situations that robot programmers did not predict. Yet most robots today are built based on the core principles of how robots behave in a factory.

Understanding nonverbal communication is a challenge. Robots can shout at people to move out of their way, but how do you get them to recognize intent — and vice-versa? Human beings have evolved to have an innate understanding of gestures and the significance of raising an arm. But when robots move their arms around humans, we don’t have the intuition of what that arm is about to do.

Creating robots to be aware of body contact location is a significant pursuit in robotics today. It’s not a question of whether problems will occur; it’s when they will happen. How can we ensure that when robots collide with humans — as they will — it’s as safe as possible?

Most robots aren’t safe around humans because they’re built like machines, not humans. They move too fast and sound too loud. Traditional robot designs require high ratio gears to achieve the force necessary for helpful work, making them dangerous, noisy, and too expensive for everyday tasks. The torque generated for basic tasks can be enough to injure or kill a bystander, which is why industrial robots are caged. However, without significant gearing, off-the-shelf motors can’t produce enough force to do the job.

Unfortunately, the world in which people learn to perform their work is not the same world in which robots are programmed to help them. Beyond the software code required for fundamental mechanical functions, service robots need programming to help operate in unstructured environments. Artificial intelligence and machine learning should help but often don’t, and most A.I. systems live in virtual worlds working with static data.

Traditionally, programmers collect all the data they can and then develop a model good enough to deal with the noise in the data. That process will always be a step behind. For service robots to provide essential service, they need to be able to interact with — and learn from — the same world as humans. The solution is to build robots that move more like people and learn from them.

Replicating Humans On The Inside

Robot developers must approach these hardware and software problems from a new perspective. Rather than make robots that take human form on the outside, could we replicate the benefits of biomechanics and sensory data input on the inside?

I'm bullish on this, but also cognizant that humanoids (like Halodi) take it from a different angle and have a likelihood to win. https://t.co/9J9gLSoLNP

Robots must be designed from the ground up with intrinsic safety in mind. The robot should be, like a human, incredibly good at minimizing the amount of energy used and impact required to perform a task. This is key to how humans walk, to how we touch things and manipulate objects. The way of doing that is by considering everything involved, from the motors and transmissions to the sensors, software, and A.I.

In hardware, eliminating unsafe gears and hydraulics can cut costs, reduce noise, and improve power consumption. Focusing more on high-efficiency motor design can result in a drive system that uses very little material, is very lightweight, and is inherently safer for robot applications.

Using Ansys simulation, Halodi Robotics designed "the world's first robot to operate with human strength, in near silence, to safely work among and interact with people."https://t.co/FEaz9G1cUU

In software, adding the ability to gather environmental data in real-time can improve the quality of the information robots need to learn and turn them into a self-improving product, becoming smarter with each environment and application.

Together, these technological innovations can reimagine what a service robot does, where it operates, and how much it costs — everything businesses have been demanding.

Developing a capable, affordable, safe humanoid robot is not as simple as Elon Musk’s offhand comments indicate. To have a genuinely safe HRI, developers must take a more holistic approach and evaluate everything from the motor design to the total body weight. The choices made in the initial steps of designing the robot may have repercussions at the end application in an entirely unforeseen way. Everything becomes part of the optimization problem of making a better, safer robot from end to end. 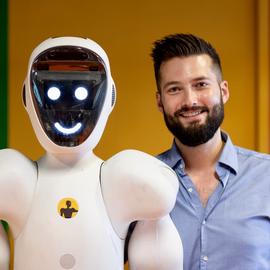